Back The Tent Question: Our Thoughts on Two-in-a-tent vs Three-in-a-tent At our post-Diwali team meet, the topic of discussion was— possible changes in our trek method for better economy of resources. That’s when one of our trek leaders suggested three in one tent accommodation instead of the TTH standard twin sharing tenting policy. Thus began the debate of 2 vs 3 in a tent !!

Let’s see, how it unfolded:

Apparently, the upside of three-in-a-tent was lesser goods carriage and more ease with logistics.

“We would have lesser number of mules and mule men to hire, which will obviously mean reduction in per person cost. We noted that most other organized trekking companies provide triple accommodation and we too could do some serious cost-cutting by following the same.

Also, the tents used in TTH are market standard triple-accommodation ones anyway. Three-in-a-tent will not exactly make trekkers uncomfortable.”—pointed out TL Abhishek.

TL Hardik, who has led our Goechala Treks all through last summer, was the first to object to three-in-a-tent:

“We were camping one time at 12,980 feet in Dzongri. Three friends insisted on sharing one camp. One of them had caught cold, which is actually very common in the mountains. She came the next morning and complained of shortage of breath at night. At the next camp, we shifted her to a double sharing accommodation. That day her oxymeter reading improved.”

Thus, especially for those with challenged breathing, twin sharing will surely serve better. The higher you go, the thinner gets the air and we would rather avoid the risk, because winter is coming and everything is going to get a little more challenging in snow!

If you are looking to get comfy, go for a spa weekend. In the mountains your guts is going to get tested to the core. No room for luxury!—isn’t this what we hardboiled trekkers always tell the newbie? And yet, putting three in a tent is a little too much.

Where would you put three heavy trek-worn (and smelly) boots? The narrow strip of ground between the first and the second zipper of the tent frees up hardly enough space to keep two pairs, also, if you are carrying trekking poles, this is the only place to keep them. Imagine the mess if the ground is muddy or full of sludgy snow! 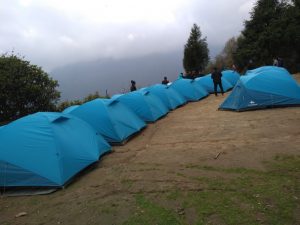 “You are going to have three full-grown people, plus three full-size backpacks inside the tent. Practically speaking, that’s a chock full, and I am not even counting the extra bags trekkers bring sometimes. I bet many trekkers would rather want to sleep outside with the mules than stay inside the tent packed like sardines! Luxury should never be the mantra, true, but our trekkers would need a certain level of comfort to get a good night’s sleep.”—came a rap against the three-in-a-tent norm and everybody agreed in unison that sleep-deprivation in high-altitude treks can lead to the worst of consequences.

By this point in the debate, double sharing had gained more mileage and our Operations Head, Sandeep had taken out a blank sheet and scales to determine tent area and draw some concrete conclusions— The upshot? Three person sharing will restrict movement to some extent while double sharing a tent will make it just about spacious enough to do some seated and supine yoga, just in case it’s raining or snowing outside and you and your tent-mate have nothing better to do!

Lack of privacy becomes apparent in three-in-a-tent setup when one of the tent-mates has to change clothes, driving the two others outside for decency’s sake. Had it been two people sharing, the time for changing could be better coordinated.

Also, we don’t want couples to suffer from lack of privacy when coming on treks with us. It is understandable that couples would want to live in one tent not only for having their private moments together, but also for sharing items that couples pack for two. The three-in-a-tent setup will mean hetero couples having to stay in different tents as we have to arrange same-gender accommodation for all, while, in a twin sharing system, couples can conveniently share the items they are carrying and enjoy more convenience as they get to stay together.

Inside the Tent in Bad Weather

We got a count of downers way too many for thee-in-a-tent during bad weather.

What happens if tent walls get soggy from heavy rain? If two are bunking in a market standard triple sharing tent, at least they can move to the center and avoid sticking to the walls.

In twin-sharing, there will probably be enough space inside the tent to take your hiking boots in if it starts to rain. Also, it’s advisable to take your boots in when it is subzero outside, because tying frozen shoelaces in the morning is a menace!

-Won’t it be more difficult to send out two tent-mates when the weather is bad and one has to change?

And then the discussion turned to disaster times—

“Talking about bad weather, what will be the condition if one or more than one of our tents get damaged wholly or partially in a hailstorm or something? God forbid!”—was the question put across the table.

Senior TL Harinder related his experience in such a situation.

“It was Roopkund in October. A strong squall suddenly tore at us when pitching tents, damaging three tents. We were carrying only one spare. It would have been very difficult that night to shelter all of six trekkers whose tents got damaged if TTH did not have the twin sharing policy of standard 3 people tents.”

So, the option of accommodating one person extra in times of emergency would be there, if we continue with twin sharing. This could more or less conclude our debated in favor of our existing tent sharing policy right there, but there was still one popular myth to debunk.

Is Three-in-a-tent Warmer than Two in One?

Warmth and insulation primarily depend on the quality of the tent, not how many are sharing it.

The idea of sleeping close and cozy in biting cold temperature is surely inviting, but for that you need not put up with the suffocation of a three-in-a-tent setup. All that is needed are good quality tents made of proper insulated material. Making sure of which, we at TTH also provide super-warm sleeping bag liners.

[**Did you know? With all the body heat of three huddling inside a tent against the outside subzero temperature, water droplets gather in plenty on the cold surface of the tent’s roof as a result of condensation.

This inconvenience could be sufficiently kept at bay if it’s only two people breathing inside.]

Won’t you say, it’s fair to continue our existing twin sharing tenting policy after all?

Do let us know what you think.