The ‘Twenty -1000’ air – Stok Kangri Expedition: My Experience
Prologue:TheBeginning:-
Itwas a thought that made me took decision for a summit re attempt, yes a re-attempt. Last year’s failed attempt still fresh which had given me a lot of sleepless night. Though broken by last year early retreat from Base camp due to deteriorating climate and incessant snowfall , was not completelyshattered. I resolved on for a summit reattempt of Stok Kangri this year of2015. Stok Kangri if you might be knowing is the heightest peak in the Stokranges of Leh Ladakh region .Vastly unknown by common world but quite famousamong trekking and mountaineering fraternity . Finally I braced myself for thisyear’s summit attempt .
Wentthrough a long thought process on when to actually jump jet myself to Leh .Timingwas all crucial as mountains has its own climatic ecosystem ,totallyunpredictable . And the fear of a third chance to scale it (partially due tohuge monetary expenditure involved) was also looming high . Finally decided on makingattempt in the month of September ,15.Though very well aware that the month ofSeptember are to be the coldest and the driest .
The run up till D-day was quite interesting .Went through a loads of journals on high altitude survival techniques, AMS,HACE ,HAPE , medications required, exercise regime to follow, the recommendedfood and clothing and so on .
Theday neared pretty fast . I left Pune on 12th Sep to Leh via Delhi .Quite excited and tensed too in the same scale .Lot was at stake this time .
Day- I . reached Leh at around 8.30am .Spent the whole day doingnothing, literally nothing . The day as well as night were equally cold for meto brave outside and so got a chance to play lazy in my warm homestays. 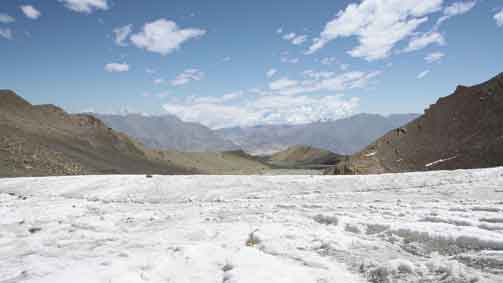 Day- II, I left Leh city for the Stok village –mystarting point for the trek . As I felt I am not yet well acclimatised for the heightsof 12000fts I decided on taking another (luxurious) break a day of relax beforestarting the hardship . These were the only 2 days I had a leisure of stayingindoors having a roof above and warmfood and blankets . Day- III, I rendezvous at the starting point . Meet my guide and so Iwent . My halt for the day was at asmall rocky base called Changma ,pearched at a height of 4030m , which Ireached after 2 ½ hours and 6 kms of hiking. The sun was high with its warmthbut the wind was still chilling . My balaclava was the only thing that provedto be essential in today’s windy day .Feltto be a happy trekker under the warmingSun. Spent rest of my day reading a novel and writing travel notes , inside mytent .Strolling aimlessly, savouring nature’s beauty around the camp was theother thing I did . 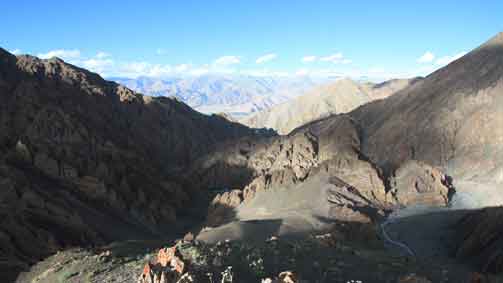 Day– IV. Today I was to reach the Camp –II called asMankarmo camp at 4480m .As per schedule we started off at around 9am . To reachMankarmo camp it took us 3 ½ hours . The.base was quite impressive with river Indus flowing just metres away from my tent. Lots of activity could be seen there . There are mules ,horses and peoplefrom various nationalities were seen . The camp –II was equipped with a central kitchen run bylocals . A pretty hang out place , warm and people from around the worldconstantly frisking for snacks and food .There I interacted with a team fromJapan and another from Scandinavian country. Quite interestingly all were doingwhat I too was doing ,acclimatising and relaxing .Now you might think how we were relaxing inthose heights . The answer to this was – Godfather .(local beer 😉 ) . Theweather was superb and the Sun was high on till late evening. 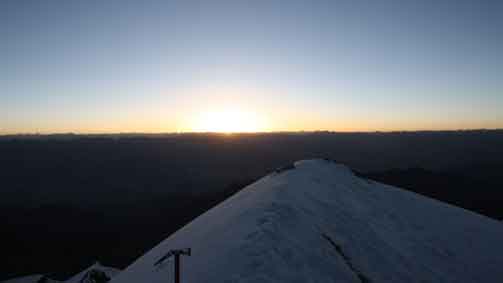 Day V. A punishing day , that’s the word I willdescribe for today .The weather suddenly turned sour , lots of snowfall late atnight .It got too windy and the sky was all covered up by clouds . The hike toCamp –II called the base camp was just 4.5 km from Mankarmo camp-II . But theweather god was quite unhappy to find us devoting to another God ,The‘God-father’ the other day . So he decided to show his fury .Punishing us throughout the way. The wind particularly bothered a lot . My knees were alsocomplaining so was my running nose . The path seemed endless and I was pantingfor oxygen. The trek till Base camp usually takes 3 hours in normal conditions. But it took me 4 ½ hours . 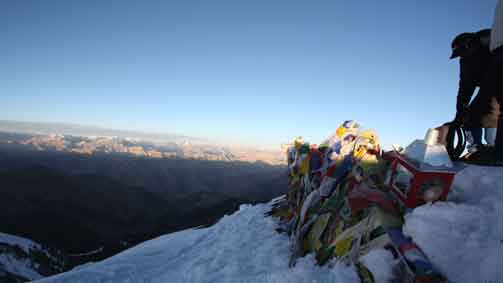 Literally , Weather god might have felt reallyhappy today to fury on us and churningus with his weatherly whirlpool . Unfortunately my trek mates took the bolt themost and they decided on to quit . I got baffled by their sudden turn of decision. No they could not do this . I will beall alone . I literally begged them to stay and at least stay at base campto recondition . All of them showed some sign of AMS or acute mountainsickness-dizziness and vomiting to name a few . They were sent back by captain of Basecamp-III that very night with another guide. The tricky weather was not enoughthat now I have to tread all alone . I could not hold myself with today’spassage of events. I forgot the smell of food I ate as my running nose deniedme the right to smell the tasty food . Only exception were my taste buds .Andthose too complained as the lunch comprising of ladakhi food called Thuppa and someweird looking bread, was all bland for my taste bud to tinkle with joy. I was all shattered and broken withtoday’s tide of events. The night camepretty fast that day .
Day V,Time- 10pm , Temperature outside -5degrees. 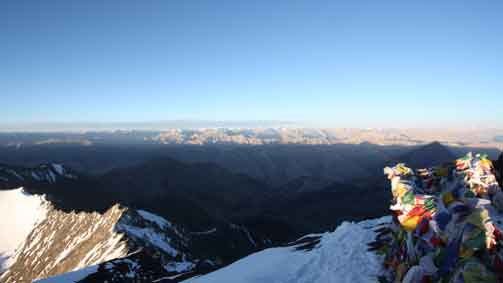 I am Hulk ,I am invincible . My muscles have grown to huge extent .Am allgreen .I saw myself jumping around from one mountain peak toanother and finally I was on the Stok Kangri’s summit . Ya hooooooo !!!!
Igot a shove . with half closed eyes I saw my guide was flashing his torch lighton my face and was yelling on me to wake up , its about time for us for oursummit attempt . Shit ! again the samedream of me turning into a HULK . Itwisted my leg a bit. I felt no sense . Abad thought relayed through my synapses .A chill emerged in me and I hurriedlyran my hands on my legs till the toe . Ah,all safe !! It was all cold andstill senseless to my touch . But I am HULK .And I am invincible .
What the hell ,was I hallucinating ?
Iwas dragging myself out of my sleeping bag like a snail , as lazy I could be .But the stern looks and some bold words of my guide sent a warm chill andsomehow I hastily rolled myself out of my sleeping bag and from my tent .I sangto my guide – Tad-da !! , I am ready .Bom chiki chiki bom chik ! . My guide’s face contoured changed and he burstinto laughter .
Day V,Time- 12.30 am ,Temperature outside still -5 degrees. 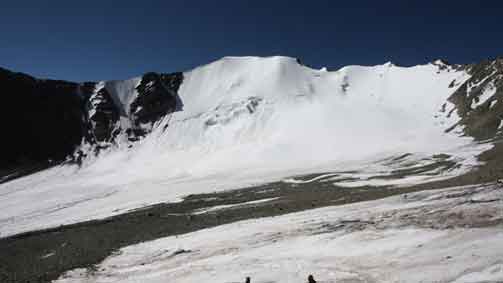 Wespent some fifteen minutes or so and clicked a lots of pics . While at summit Ifelt a vibration in my right pocket where I kept my mobile phone .At first Iscoffed off the thought of my phone vibrating .Then came another vibration . Itbaffled me . I pulled out my phone and looked at my phone. Totally catching meup as a surprise to see a SMS from my mother. Puzzled, how this piece oftechnology got to hook on a telephone network .Anyways, felt really happy onthis coincidence !! How come Mom comes to know everything and every time whenever I am inpain and feeling low . It brought me a tickle of tear in my eyes and a smile. I immediately tried ringing my Mom’s phone and I made the highest phone callever at 6153m/20480 fts in my life . All bodily pain evaporated in that thin momentof joy talking with my Mom and then to my Dad. Congratulatory voices swelled mylungs with a sense of achievement andfulfilment.
Themoments I spent there seemed to me the longest . I got intrigued with my ownthoughts .Honestly I do not know how my dreams became reality. But I alwaysbelieve I must have done something really cool in my last life to deserve this.For which I eternally feel rewarded .I have now achieved what I have longdreamt. With all the months of toiling hard under the sky ,conditioning mybody ,sweating in gym leading adisciplined life and following disciplined diet presented me this ultimatereward of my lifetime that will be cherished forever.
Day VI: The Return Ordeal:
Thereturn was full of monologue and exhaustive manoeuvres. I tried various ways tokeep my mind wandering off . I listened to songs , which irritated me after fewminutes . I sang out loud , my throat got coarse and I stopped . And so afterfew minutes I mind got blanked out after few minutes, with no thoughts, totallyempty .
Itwas already getting dark and I had some 1-2 hours of trekking back to Base campleft with me . I was simply longing to see the path before me to end . I wantedto descend and quickly rush back to the base camp. I was actually lookingforward to get inside my cramped tent and into the uncomfortable, but warmsleeping bag. And to my irritation it was not ending at all .I was literallycrawling and dragging myself and enduring my pain .
Thebase camp can be seen below . The blue tent is the central canteen.
Ireached base camp crossing the crevasses zone of glacier at around 7pm .Thus my 19hrs ofcontinuous trekking ordeal ended at Base camp . I was dead tied by then when Ientered the Base camp’s central canteen.The Camp manager came to me along with the others whom I didn’t recognise , congratulatedme . I was served a warm ginger tea which I was longing for . I do not rememberanything after that except I went to my tent and fainted. Next day I woke up ataround 9am .Rest is history .
Assome one said:-
“By climbing mountains we were not learning howbig we were. We were finding out how breakable, how weak and how full of fearwe are. You can only get this if you expose yourself to high danger. I havealways said that a mountain without danger is not a mountain.” This statement resonated my beliefs and passion about thesemajestic Himalayan ranges .