‘Everytime i go to the high mountains, I discover something new not about them, but about me.’
(Anatoli Boukreev)
We had met just about a year ago, when our passion for the mountains brought our group together at Roopkund. The question after that was – What next? The allure of breaking the 20,000 feet barrier (about 70% the altitude of Mt Everest summit) made our thoughts converge towards Stok Kangri. Due to the glamor of the trek and short window during which it is open in a year, we quickly mobilised ourselves and did the groundwork in february ’13. One conversation with Rakesh Pant from Trek the Himalayas (a group we had heard a lot about in Roopkund), and we were convinced about the team we wanted to go with. We signed up for a slot in July, before the monsoons would hit Ladakh.
So we flew into Leh on the 12th of July. We spent the first couple of days acclimatizing and sightseeing. We read that in case one flies in, 2-3 days of rest is recommended before the expedition. However, we used this time to visit Pangong Tso, motorbike up to Khardungla top and visit the local attractions and monastries in and around Leh town. 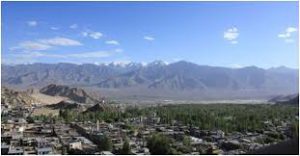 (View of Stok Kangri Summit from Leh town)
Right from the time we landed, we felt the towering presence of the summit from the town, and it did look a little intimidating and overwhelming to a few of us initially. though that did not really dampen our spirits, for the weather was great and we were well prepared for the impending challenge.
Day 1 to 4- Leh to Stok Kangri Base Camp via Stok Village,Chang Ma and Mankorma
Day 1 – Chang Ma – The trek started at around 10:30 in the morning from Stok Village (the last motorhead) with everyone in good spirits and walking through some stunning rocky landscapes. The path meanders through the valley and each bend opened into some fantastic visuals which were met by collective ‘oohs’ and the ‘aahs’. This stretch was supposed to be easy, but did have some steep ascents in stretches. Being the first day of the climb, it was a bit of struggle to get into rhythm. The heat was not making it easy for us either. The temperature was in the late 20s and was exacerbated due to the high altitude. After a period of struggle, we reached the Chang Ma camp in the afternoon after a 4 hour trek. I had developed a headache and was more than eager to just head to my tent and call it a day.
(Day 1 – Trek from Stok Village to Chang Ma)
Day 2 – Mankorma – The trek from Chang Ma to Mankroma was short and a very gentle gradient. The landscape was beautiful and we did this stretch in a little over 3 hours, at a leisurely pace, clicking photographs and admiring the mountains. The mood amongst the team was very good and we were finally settling into the rhythm we missed on Day 1. We followed the daily ritual of our acclimatization walk (going higher and sleeping lower). My headache was getting no better and I was beginning to fear the symptoms of AMS, which much to my relief, was not the case. 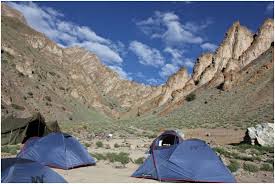 (Day 2 – Chang Ma to Mankorma – First glimpse of Stok Kangri summit during the trek, at Mankorma Base Camp)
Day 3-4 -Stok Kangri Base Camp
The next day we headed towards the Stok Kangri Base Camp. The camp, located at about 5000m altitude, would be the starting point for the summit push. The 5 hour trek was mixed for us. While we trekked on comfortably at a decent pace, the air was perceptibly thinner and it was significantly colder here than the previous camps. One of the days at base camp coincided with the birthday of one of the trekkers. It was quite a surprise to find that our cook had baked a wonderful cake at almost 17000 feet. It was truly appreciated and followed by a session of cards and jokes, which continued late into the night. Next day we adjusted our equipment and crampons in preparation for the big climb.

Day 5 – The Summit Ascent
The big day arrived and there was a buzz about the camp. Talking to a group of German veterans who had reached the summit a day ago had made me confident about our chances. We were all very excited and most of us couldnt sleep before the summit push. I for one, chose to avoid eating at all, in order to avoid bathroom visits high on the summit ridge, which could be potentially dangerous.
We set off around 10:30 at night. The route was to start with a steep ascent, followed by a gradual period of ascent and descent till we reached the glacier, followed by the steep ascent to the ridge and then the summit ascent via the shoulder. During the night, I was struggling off the blocks, being the poor starter that I am. The first couple of hours were tough and I was struggling in the cold. The encouragement of the guides and my fellow trekkers helped me set small targets on the way, rather than the summit itself. In mountaineering terms, this is known to be frequently recommended by the experts. After laboring along the way for over 3 hours (seemed endless then), I finally reached the end of the glacier and the point where the actual climb began. the team had broken up by now depending upon the pace of the trekkers. I found myself somewhere in the middle, but completely cut off from the team. Me and a fellow trekker, kept motivating each other up the route to the ridge and could see the summit in the distance ahead. 2 hours later, daybreak finally came and we were beginning to feel good about the climb. We were on our way to the ridge now and were glad that the team also had come back together in order to figure out the path leading to the ridge. The snow made us use our crampons to get bite and avoid slipping at these steep slopes. We were not using fixed ropes, hence slipping had to be avoided. After a slow and tiring ascent, we finally reached the summit ridge. Many in the team were too tired to continue and confused the ridge with the summit, only to realize that the real ascent only began after this point.
(The glacier before the ascent towards the ridge) 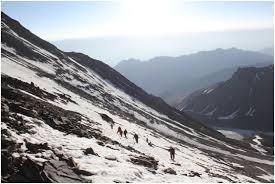 (Trekkers approaching the ridge after crossing the glacier)

(Trekkers taking a break on the summit ridge)

(View of the Karakoram Range and Saser Kangri on the right)
On the ridge, we could see that the actual summit was still at least a 2 hour climb away. The access to it was via the south shoulder. The shoulder was a very steep and narrow channel of rocks over which we laboriously climbed on all fours. We had to be very careful as one slip or error would lead to a fatal fall. After a grueling climb, we saw the shoulder gradient ease out into a walkable path. In the short distance, we saw the summit clearly and the prayer flags that adorn it. The thin air was making every step difficult and finally, after a short hike up, I was greeted by the trek leader Sandeep at the top of the summit. I think apart from being overwhelmed, most of us were too tired to react or celebrate. We paid our respects at the prayer flags, thanked the heavens (only a short distance above us!). It was a special feeling to reach the summit and to be at these extreme altitudes. The views my eyes and my camera captured, will remain with me for the rest of my life. 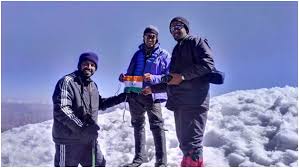 (Atop the summit – Our tricolor moment)
A special thanks
Behind every successful ascent is a team which makes it possible. I thank the team from Trek The Himalayas for their thorough and professional organisation and conduct. Every member of the support staff including the guides, cooks and porters were excellent and their company was good fun. In adverse times, when a trekker had to be rushed down to Leh and hospitalised, many of them acted proactively, carrying him on their shoulders over several kilometers. We all admire their courage and commitment.
A special thanks reserved for our trek leader – Sandeep Rawat. There are humans and there are superhumans. Sandeep fits into the second category. Thanks for guiding us on to the summit and for guiding us safely during descent in very difficult and slippery conditions, thereby, saving most of us from serious injury. His thorough knowledge and accomplishment s in the mountains, make him a fantastic companion who brings a positive influence on any team.
Thanks to Rakesh Pant for all the support and organising a memorable expedition. I look forward to trekking with your team again.