Oh! What an expedition in the land which meets the sky. Itwas my first visit to Leh, a region mostly believed to be cut off from the restof the world but to my amazement it is more like a global destination and youwould find more international tourists then the Indians. Locally the culture isa mixture of Buddhist and Islamic coexisting peacefully in Indian flavour.

Leh isknown for its monasteries but it requires an effort to pray over there as taskto reach is mammoth. Every monastery is righty placed on hills surrounding theLeh faithfully looking at city in the valley below.  One of them is Castle at Tsemo, situated rightabove the Leh palace from where we are able to visualise the whole city of Lehand getting over there is fun, as we had to navigate our self through thenarrow streets of old market and then the foot trail through the muddy rockymountain. You can also reach it by vehicle, but then what’s the fun in it? Onthe other side of the town there is Stanti Stupa, but unlike Castle Tsemo it isa modern well built structure and a great place where we learned more aboutsundial, a small drawing on the floor, step on it and it shows the timing byusing your shadow made by the sunrays.

Theview of Stok Kangri far off with its snow clad peaks made an unforgettableimpression and has its variety at every place in Leh, but most stunning is withKarzu Lake in background. Karzu Lake in summer looks like small pond with lotof weeds blossoming with flowers at the centre of Leh city. Locally it is theplace of refilling clean water and playing ice hockey in winters.

Onething uncommon in rest of India of refilling of clean filtered water in mineralwater bottles is seen at many places in Leh market. Market is full of shops androad side vendors selling exotic stones and antiques. They were good place tobargain if you believe that such items can change your destiny as every item isserved with spicy story of good luck. After being tiered of window shopping  we stopped for filling up the tummy andbelieve me or not there are plenty restaurants serving variety of dishes frominternational to desi, but do not be amazed if dosa starts tasting like momo inthe land known for its Tibetan food. When we were haunting for direction toGerman bakery as one of my friend wanted to have English breakfast, we foundour self misguided as local where also confused as there is at least one Germanbakery on every road in market area of Leh.

Aftergetting acclimatized properly by roaming through the streets of Leh city, thetrek started from Stok village, a 20 minutes drive from Leh, situated on banksof Stok River. It is a small village know for its palace and picturesquelocation. The trail is through the banks of Stok River till a point where youhave a choice of climbing a steep hill or bypass it by crossing the river. The firstone was chosen by the trek leader as you would not like to get wet whilecrossing the rock uncertain river banks. Sounds crazy to climb a mountain, whenshortcut is available only to avoid getting wet, but that how it works inmountain. Be safe and sound, as wet body is enemy in this cold rigid desert. Latterpath is mule path used by locals for providing logistic support to thetrekkers. The steep path through this hill was slippery and required each stepto be placed with proper grip, but once you reach the top, we were gifted withthe prize of excellent view of Stok valley. Then we climbed down the path toriver banks again. We had to walk and walk through on the path through thebanks of river sometimes through trail shattered with rocks and boulders tillyou reach the Chang Ma camp area.Being tiered after the walk is natural, but we were quickly energized with thenature’s beauty we experienced there. Chang Ma is a camp close by the river,surrounded by the straight wall like mountains on all four sides like a jail,but this jail you would love to live in. Many trekkers continue their trekforward to Mankorma, but we had a deserving rest day. Most of the time we spentstaring at the huge mountain walls, dipping our feet in the chilling water ofriver. Oh! Water is very cold and sends shock waves though the spine, but onceyou get adapted it feels wonderfully good. All the exhaust felling runs away likea treatment. In the evening, in the height gain exercise done to properlyacclimatise to the altitude we went trekking to nearby peak. From where, we areable to view the valley and trail to Mankorma. To be blessed by the Gods prayerflags were offered on the spiritual stone structure. The day passed away andnight crawled in with blanket of stars. Crystal clear night sky with its tinylittle stars adds flavour to tent adventure.

Insummer the light scatters from mountain peaks as early as 5:30 in the morningand you can enjoy the sun bath to wipe out the cold from your body. A healthybreakfast and hot honey tea gave us the push to march forward. We climbed up tothe treacherous mountain peak visited earlier to slip down to valley visiblefrom above and walked through the rocky banks. While walking we felt to beguarded by huge sliced mountains on the two sides. The Mankorma camp site iscloser to the river bed and here also we enjoyed starring at magnificent peaksincluding Stok; waiting for Ibex, the mountain goats to come. We were lucky theycame, allowing us to take numerous cover shot photos. In the evening during theheight gain exercise we climbed Parcha Kangri. The view from these peaks isbreath taking and we were able to see Leh far of at a distance, thanks to clearweather. Best reward of this climb was that I was able to get mobile networkcover up there, so that I would contact my loved ones back home. After apleasant day, night comes only to be woken up by warmth of sunrays.

Nextday while walking to base camp it was pretty clear where we were heading as themighty Stok was clearly visible. We walked upstream to reach our destination. Marmots,the mud dwellers, were easily sighted on the way up, at many places as if theywere following us. Base camp is heaven in the mountains with streams flowingwith icy water, a small restaurant and designated place to rest. 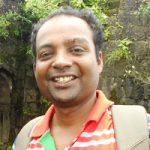