Roopkund : A Journey Within I always dream of mountains. There is something about their up there that calls to me, making me want to get out of the confining walls of my office and breathe in the sweet scent of trees and flowers, listen to the magical songs of birds and drink deeply from the clear streams that glistengaily under a soft sun. Mountains are home to all things that appeal to me peace, beauty, harmony, adventure, solitude When I stand on a peak under anopen sky with a strong wind blowing against my face, I feel liberated from allworldly worries, living only in the moment and rejoicing in the magnificenceand splendor of nature. It was to experience such joy and freedom that late last year while sitting trapped in my workplace, I planned a trip to Roopkund.

When I told my parents that I was planning a Himalayan Trek, a dreamy look crept into my father’s eyes. He had last visited the Himalayas in 1983 and he never tired of talking about that trip. I asked him if he would like to come along and heimmediately agreed. On the morning of the 22nd of May, we reached Kathgodam by the Ranikhet Express. I had booked the entire trek with ‘TrekTheHimalayas’, a group I’d found online which seemed to be very professional and helpful. Sure enough, right outside the railway station, TTH cars were waiting to take us to Lohajung. The journey from Kathgodam to Lohajung was very scenic and it was made even moreenjoyable by our fellow trekkers whom we were meeting for the first time. We reached Lohajung by late evening and by then many of us had already made newfriends. At night, before dinner, we had a briefing about the trek which was to start next morning and all of us were a bit queasy by the end of it. The conditions were tougher than we’d anticipated. There was a lot of snow at Roopkund and the weather up there was very unpredictable. The last TTH team that had attempted to reach the summit had failed because of as now storm that lasted over five hours. All of us started reviewing our preparations, wondering if we had enough of everything to prevail against the foul climate. There was a nervous energy in the air as each one of us focusedintensely on the goal we had set ourselves, summiting Roopkund.

Next morning, after a quick breakfast and a few camera snaps, we were on our way. It was a relief to get started because trekking is far easier than looking at the mountains and thinking of scaling them. We walked through a spectacular landscape of forests and streams,resisting the urge to click away at everything we saw on the path. If there is one thing in the Himalayas that has limits, it is the life of your camera’s battery.

On the very first day, we developed a closer apport with our trek leader Bunty and our guides Amar and Madan. These three men will always be our heroes for the part they played in our adventure. As for the team as a whole, everyone seemed to be gelling really well, looking eagerly ahead at an extremely exciting week. By early afternoon, we reached Didna, acute little village in which we were hosted by a local family. The food we were served was amazing and the accommodation we were provided with was warm and comfortable. All in all, a perfect start to a difficult and challenging journey.

On day two, we set out for Ali Bugyal. The trek began through a dense forest made up of big trees that allowed very little sunlight to penetrate through to the ground. As we walked higher and higher up,the tree-line ended, making way for a sprawling meadow the likes of which none of us had ever seen before. The grass over there was fresh and green on everyside and the view all around was simply breathtaking. We sat there, speechless,drinking in the magic and the beauty of the place in absolute silence. The night at Ali Bugyal was extremely cold.We huddled around a fire, singing and looking at the stars as they shone in all their glory. The landscape was now made up primarily of rocks, highlighting the sheer size and space of the Himalayas. After dinner, we went to sleep in our tents. The cozy comfort of our sleeping bags brought some welcome relief from the strong, bone chilling winds of the mountains.

The morning of day three was warm and clear.We set out on rocky terrain but soon the scene before our eyes changed once again.The brown and grey of stone made way for white as we walked into large spaces of snow. There was some excitement at this because many in the team had never seen snow before. Quite a few snowballs were hurled amid shouts and laughter as we moved deeper into a bright, white world. 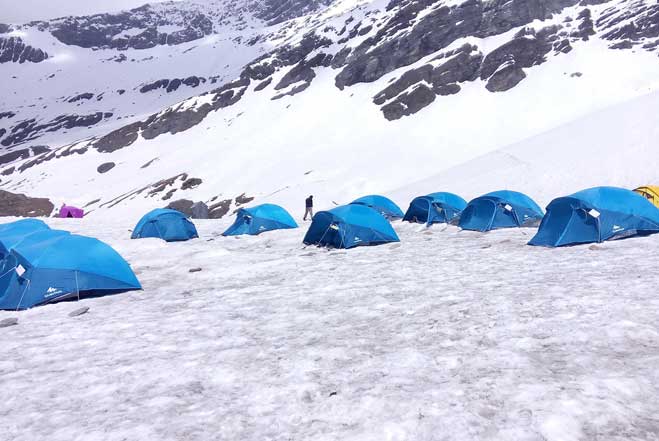 Our next camp was at Pathar Nachuni, the perfect place to just sit and marvel at the snowcapped Himalayan peaks. Late in the evening, once we were safely in our tents, there was a hail storm which turned our campsite into a sea of white. It was a very pretty scene and we had a lovely time picking up the perfectly round hailstones and eating them. That night, we celebrated the birthday of one of our team mates with a cake arranged by Bunty, our trek leader. It was a surprise celebration because none of us had thought it was possible to procure a cake at 12000 feet. Bunty made it happenand all of us were deeply touched by this extremely special gesture.

The following day was the fourth day of ourtrek and we headed for Bhagwabasa, the last camp before the summit. Snow, which we had found fun earlier, now became the enemy as it made it very difficult forus to find any sort of grip. We struggled through the white wilderness,slipping and sliding, and finally arrived at Bhagwabasa, a camp in which all the tents were pitched on a vast white wasteland. That night, once again, we were surprised with a cake to celebrate the birthday of another one of our team mates. Bunty did the impossible by baking one at 14000 feet and it was the best chocolate cake any of us had ever tasted. We were set to depart for Roopkund at four in the morning and that’s why we turned in early but the severe cold and the how ling wind made sure that we didn’t get much sleep. To say that we were freshand raring to go in the morning would be a lie. I took nearly fifteen minutes to wear my shoes and crampons because my fingers were numb in the cold and I didn’t feel like leaving the warm comfort of my tent. I finally stepped outinto the freezing world only when I heard Bunty’s comforting words, ‘Trekkers,tea is ready!’

We walked with our heads bowed so that our head torches could illumine the way, trying to place our feet on the footmarks left by those in front of us. On our right was a wall of ice and on our left was a steep fall that went down hundreds of meters. Everyone in the team was quiet because we had come to the point where we were only in touch with ourselves. Every step required that we either live in the moment or else risk disappearing into oblivion. It was a physical and mental struggle and wetrudged on, one deliberate step at a time, our breath coming in short, painful gasps. It was a test of our endurance, a challenge to our spirit, an adventure for our soul. After nearly four hours, we found ourselves scaling up to our destination. By this time, the sun was out and the light reflecting off the white desert around us was absolutely blinding. When we finally reached the top, feelings of happiness, achievement and relief over whelmedus and we stood for a long time just staring at the frozen lake for which we had come such a long way. Roopkund was everything we had thought it would be,majestic, mysterious and magical, and we could only marvel at its magnificence.Another thing all of us were proud of was that our whole team made it to the summit. Being able to share in the sense of accomplishment at having completed our quest was extremely special.

The return journey was made easier by the high we got by conquering Roopkund. We stopped for lunch at Bhagwabasa and then dragged our feet all the way down to Pathar Nachuni. The day of the summit was extremely challenging and exhausting but equally exciting and satisfying. That night, at Pathar Nachuni, we went to sleep not as tired trekkers but as proudsummiteers. The following morning was our last among the snow capped peaks and we bid a sad goodbye to the mountains. On our way back,we stopped at the beautiful Bedni Kund and took the steep path that led down to Wan. Our adventure was now over and our fellowship was at an end. We had,however, formed friendships that would last forever. Roopkund will always be much more to us than a mere frozen lake. We will remember it till the end of ourlives as the destination of an incredible journey on which we saw nature at its best, breathed air which was pure and fresh, heard birds we had never heard before, tasted food prepared with a lot of love and care and discovered ourselves by exceeding our physical and mental limitations and becoming one with our surroundings. Personally, I will also cherish this trip because of the quality time I got to spend with my father and I will never forget the look in his eyes when we first came upon the snow clad mountains. It was a look of we and wonder, two words that best describe the emotions felt by all those wholove the Himalayas.