Back Kuari Pass Trek – Getting High on Mountain Peaks

They weren’t kidding when they said “Trekking is an addiction”. This was my second Himalayan trek this year, the first being Roopkund, I summited Roopkund in June. 6 months and I was craving to re-live the experience. So I decided to summit Kuari pass in December after my engineering exams. Trekking and the little escape to nature at its most magical, purest self has been the best teacher I’ve ever had. The peace, beauty of nature, the pleasant sound of the streams and the water gently hitting the rocks around, add up to the beauty of the place, where you can listen to your own heart and explore new things about yourselves. Shady and dense parts of forest gives thrills whereas the ice-caped peaks give you adrenaline rush. Meeting new people, sharing experiences, the feeling of being on top of the world when you reach the higher parts of the mountain, the unexplainable joy and excitement, it’s all surreal.

We reached Haridwar a day before the trek and started exploring. We attended the Ganga Aarti and took a SELFIE with Shiv Ji’s statue. After 9kms of exploring, it was dinner time. Without any thought I went to eat Gujrati thali. At night I was so excited, I always wished to summit the pass before the rest of my team members. Thousands of things were running through my mind. I started preparing myself to be tough because this time I decided to carry a rucksack on my own (Unlike last time when the Mules were carrying it). My journey will unfold as you read my article.

It was a long drive of 256 kms passing Rishikesh, Devprayag, Srinagar, Rudrapryag, Karnprayag all the holy places look so beautiful. Our Bolero driver – Umesh bhaiyya, had a wonderful playlist of songs. Singing as we passed mountains, rivers, villages made the journey amazing and joyous. We reached our guest house in Joshimath at 7PM. At the end of the day, I admit the journey was too tiring and I was craving for food. After Dinner we had Trek briefing from Rahul bhaiyya (Leader: Theek hai na :P). We introduced ourselves, shared experiences and had a nice, pleasant time. Later, we went for a walk and with time we all started to know each other. We ate yummy ‘Gajaar ka Halwa’ after which we gathered in a room, where Ashish, Milind & Shritu told us the scariest stories. IT WAS AMAVAYSA. It scared the shit out of us. Soon, we called it a night. It was a small drive of 12km and then the trek started. We quickly clicked a picture with all the trekkers and officials. Later, the magical journey began, beautiful mountains and eye – glittering views stunned us. Moving slowly and passing through a few villages, we reached our first camp site i.e Chitrakanta camp site (9600ft). Rahul bhaiyya allowed us to select any tent we wanted to stay in. So everybody ran to get their tents. It was so fun. Later we played volleyball and got ready for the acclimatize walk through the forest. Later we came back to camp site a played volleyball again. Deepak bhaiyya always used to shout LE BHANJEE ( 😛 ) while playing, so throughout the trek, anytime anybody shouts “LE BHANJEE” everyone else would shout back.. Haha! That was fun! We sat in Dinner tent and played Dumb Charades for few hours. After dinner we went out to watch the sky full of stars. It was mesmerizing. I couldn’t stop myself from staring at them. It felt like I was in heaven. Later, Harsh and Milind tried to capture the stars on their cameras. The cold wind urged me to go back into my tent and have a good sleep. Keeping in mind that the next day will be a much more challenging one, I geared myself up for the next day’s adventure towards the Summit. Today we had to cross the forest. Playing songs, laughing, dancing, we kept pushing ourselves towards the next camp. While climbing, you always have a positive vibe and a feeling which cannot be described. It’s the most amazing feeling ever. It’s the connection of life with yourself. Even if you have a leader and team-mates, you are alone in the mountains. It’s the best time for a person to explore himself and think about himself. Unlike what we do in our daily routine. I was lost in my own thoughts while walking through peaceful, mystic forest. We reached the Tali forest camp where we bumped into a lot of trekkers and some who had just returned after summiting the pass. We asked them about their adventure. We were really kicked about the next day’s mission. We went to Tali lake for acclimatization walk and the view of the peak was stunning. We all had a tight group hug and promised to stay with each other all the time. After spending some time, we came back to camp site because tomorrow was the big day. We had the Oxygen test, and everyone was busy competing with each other about their results ( 😛 ) Feels childish, but it’s true, you are small kids in front of mighty Himalayas. LUCKILY I topped with 98% of oxygen (:P) We played Dumb Charades with other trekkers and had lots of fun. Day 4: Tali top to Kuari pass back to tali top

THIS was the best day of my life!! We got up really early and were ready at 7 to move towards summit point, as wished I decided to summit before all my team members, I started moving quickly. But Rahul bhaiyya said, “Till the broken bridge, Girls will go ahead of Boys.” So I chilled myself a little bit and enjoyed the beautiful view of the peaks- Nanda Devi, Dronagri, Kedarnath Peak, Chaukhambha. Wished I could have taken the view, the feeling they gave with myself back home. Watching this beauty all along the route, we reached the broken bridge. We saw a frozen stream through which climbers had made a way to the other end. It took few minutes to cross the bridge and reach the other end. I decided to quickly move ahead and summit the top first. Mohan and I were competing each other to reach first. Eventually I reached the summit at 12:11 PM and was the first to reach. I felt good to achieve what I planned and dreamed of. We ate our packed lunch and clicked a lot of selfies and pictures. Later, while descending it drained all the energy. It was a tough and tiring day. We came back to Tali top forest camp and had dinner. Team TTH had a surprise for us they brought a cake for NEW YEAR celebration. Special Thanks to Pushkar bhaiyya and Deepak bhaiyya for taking permission for camp fire for New Year celebration. We thanked God for such a wonderful 2016. Later, Deepak bhaiyya shared his mountaineering experiences with us. 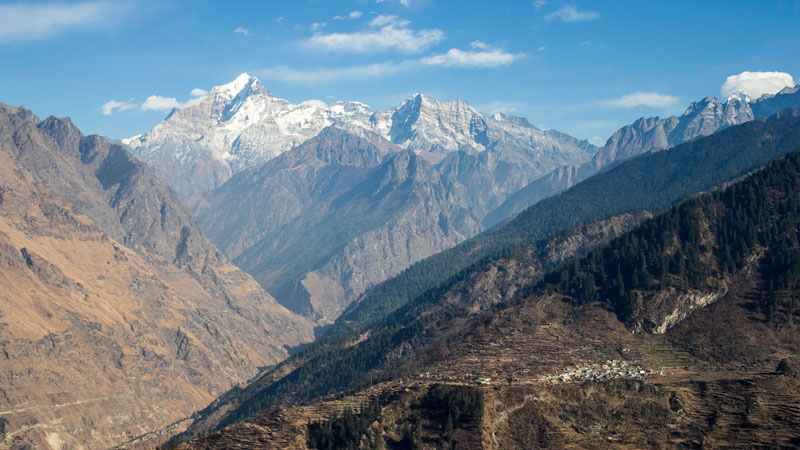 We got up late (:P) and played volleyball. We started descending towards guest house in Joshimath. It was a challenging and tiring day as we had to descend 13kms. When we reached Gurson Bugyal it started snowing. What more could you wish for from the trek? Perfect summit and then snowfall while returning back to Joshimath. It snowed all the way to Auli. We clicked lots of pics and I witnessed the first snowfall of my life. After reaching Auli, we ate Maggi with snow falling on it (:P) It tasted VERY delicious. Few of us took the ropeway and reached the Guest house at Joshimath and few took a 2kms descend to reach the spot where the trek ends. I wanted that satisfaction of completing the trek, so I decided to descend 2kms more. Then we went back to the Guest house. We all meet at end of the day and nobody spoke a word. Everybody knew that these days will never ever come again and unfortunately this wonderful journey has come to an end. We smiled, hugged each other with eyes full of tears. And promised to go on trek once again to create more memories that we could cherish our whole lives.And later for successfully Completion of Trek, TTH gave us, Certificate. A tiring 256kms drive back to Haridwar. Remembering all the fun we had while trekking as we quietly looked out with a smile on our faces. ABOUT TREK THE HIMALAYAS (TTH)

One of the best organizations I know. They provide a lot of comfort to trekkers and everything is scheduled to perfection. Staff is excellent, they are friendly and helpful. Food provided during trek was fabulous (TTH kitchen Staff Rocks).

I want to thank few people who helped us making this trek worth remembering.
Rahul bhaiyya (Leader), Deepak bhaiyya, Pushkar bhaiyya and the entire TTH crew. Thanks a lot guys! It wouldn’t have been possible without your guidance and support. Cheers!!