Buran Ghati… um, what’s that?
This was the exact response which I got from my boss when I asked him for a week’s leave to go for this not-so-popular-yet trek in Himachal Pradesh.
– Sir, it’s a high-altitude trek.

– Oh, so it’s like a hike?
– Yes, Sir (“but not like the hike you promised me last year but forgot during salary revision”, I mutter under-breath)

After some begging and pleading, he approved the leave and I hopped out of his cabin happily. Fast forward to June 2nd when, after a series of packing, re-packing, flight-hopping, sleeping on the airport floor, exploring Shimla on foot, losing my way & other misadventures, I finally reached the parking lot in Shimla on a bright, sunny Sunday morning where TTH had arranged for our pick-up. The trekkers turned up one by one – bright, friendly faces, everyone bubbling with excitement about what the next week holds in store for us. Our group of 20 comprised of people from all over the country and with ages ranging from 14 to 70 ! With this strange and enriching amalgamation of cultures, we set out for Janglik, our base camp.

The road from Shimla to Janglik (9,200 ft) is a long but picturesque one & everyone shared their previous trek experiences so it was never boring for even a minute.
We stopped briefly at Hateshwari temple, which is a holy shrine beautifully nestled among high  mountains, and after having lunch at Chirgaon, we reached our pretty little basecamp at around 4 pm.

Base camp, Janglik
Leave your broken windows open and in the light just streams (A head full of Dreams)
After moving our backpacks to our respective rooms, we gathered in the dining hall of the home-stay for our paperwork. We were introduced to the TTH team that would be our family for the upcoming week – our expert trek guide Bhisham Sir, the ever-patient Pritipal Sir and the charming Ram Sir. Our trek leader, Joslyn gave us a quick, precise overview of what awaits us in the next few days. While we were slightly intimidated by his stern, military ways, his confidence made us feel good knowing that we were in safe hands.

The following morning, we set out on a moderate hike to Dayara (11,150 ft) where the trail plays a never-ending hide-and-seek between pine forests and meadows. The lush green campsite surrounded by snowy peaks is a treat to sore urban eyes and we reached just in time before the rains came down heavily upon us. We took shelter in the dining tent with popcorn, hot soup and an extremely enjoyable round of Antakshari!

Our pretty campsite at Dayara

trail to Litham (11,800 ft) on the third day had us cross lush green fields, dense pine & birch forests, a few gushing brooks & a small stretch of ice. At around 1 PM, we reached Litham, which is arguably the prettiest campsite I have seen. The TTH campsite of Litham nests itself atop a hillock with stunning views on all sides. Behind us was a thundering waterfall that lies on the way to Chandranahan Lake. To our left loomed snowy peaks, which we must climb to reach Dhunda, and to our right stood the massive ranges behind which rests the famous RupinPass. This campsite was a delight to our senses and we were so glad to be spending 2 nights there.

Sheep grazing in the meadows of Litham
Now the sky could be blue, I don’t mind, without you it’s a waste of time. (Strawberry Swing)

Chandranahan Lake
And you give me this feeling, this everglow. (Everglow)

Day 4 turned out to be quite challenging as the way to Chandranahan lake (13,800 ft) was steep and rocky but the sight that awaited us when we finally reached was totally worth the efforts. The lake itself is quite small but it sits peacefully among a panorama of pure white snow that is bound to make one feel relaxed. The local people believe that the lake is holy and there is a small stone shrine near the lake. After some photo sessions and soaking in the beauty of the surroundings, we started on our way back, which was a steep descent down the same path that we had taken while coming up.There was a sweet ending to our hard work as it was the birthday of one of our fellow trekkers, Srisaila and the TTH cooks baked a yummy cake for all of us!
The next day we bid adieu to Litham and followed the Pabbar river up to Dhunda (13,300 ft) – the snow-covered campsite which was the last stop before the legendary Buran Ghati Pass (15,000 ft) which was clearly visible from our tents.

In the night, the stormy night away she’d fly, and dream of para-para-paradise..(Paradise)

After a brief snowstorm, we emerged into clear, bright sunlight to have our briefing for the following day. The trek leader and technical experts showed us the climbing equipment and demonstrated the tools and techniques in great detail.After an early dinner at 5PM (I am fully convinced now that the TTH cooks are sorcerers because they made hot jalebis for us at that altitude!) we retired for the night with butterflies in our stomach. Climbing tools on display for us People moving all the time, inside a perfectly straight line. Don’t you wanna curve away, when it’s such a perfect day? (Strawberry Swing)

At 1 AM, we were awakened by our Trek leader and after a quick breakfast, we set out at 2 AM for the pass.What a spectacular sight it was! The stars lighting up the pitch-black sky and a bunch of trekkers ascending a steep icy ridge with nothing but headlamps to illuminate their way.

I kept moving in a line slowly, just one-step at a time, not daring to look up. After a while I lost track of time, my feet felt numb with cold and exhaustion, and I wanted to stop. However, as much as I would have liked to give up, there was really no turning back anymore. Almost after 5 hours of continuous climbing, I walked up a ledge and realized that the road is over. I looked up at the clear blue sky and the 360-degree view of colossal mountains all around and thought that if heaven was real, it could not be more beautiful than this.

We live in a beautiful world, Yeah we do, yeah we do.(Don’t panic)
The panoramic view of the Kinnaur-Kailash ranges from the top of Buran pass
The climb down was a stark contrast to our experience while coming up. We rappelled down a rope for about 100 meters and on turning back, the pass now looked quite similar to The Wall from A Game of Thrones. From the base of the wall, we slid down the soft, white snow laughing and tumbling like little kids in the playground! After some 6 -7 slides and a descent that seemed to go on forever we reached the river campsite of Munirang (11,800 ft), where we camped for the night. Rappelling down the slope – exciting and fun! 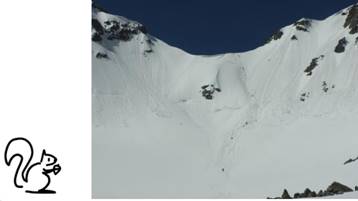 We’ve crossed The Wall. Now let’s see if we can find some White-walkers 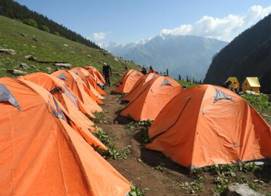 That night, lying under a canopy of stars in the shadow of the Kailash range, I realized that home is not necessarily a place made of brick and mortar but it is the moment when our heart is at peace. Also, isn’t it incredible that we can’t even think about living without things like internet, electricity, gadgets in the city while on a trek all we really need is food, water and a tent and everything else just feels like extra baggage.
The next morning, we set out for Barua (6,600 ft), from where we were to take our ride back to Shimla. I had thought that the best part of the trek was over with the pass, but surprisingly this day turned out to be my personal favorite as our trail followed a diverse route through tall, thick pine forests, a bridge over a virulent stream, shepherd’s huts, apricots-laden branches, apple orchards, and quaint villages. At 1 PM we reached Barua and boarded the cars that were assigned to us and reached Shimla at 10 PM. On the way to Barua
Buran Ghati is my third trek but it will definitely be the most memorable one, thanks to its diversity. No matter what your favorite kind of trail is- green pastures, dense forests, ridge-walks, extensive snow, flowing streams, snow-clad rugged peaks, calm villages, the adrenaline rush of rappelling– this trek does not disappoint. Finally, the journey would never have been so enjoyable had my trek-mates not been such great company. They say that trekking with friends feels great, but when you meet people on the trek who become your friends for life, the feeling is even greater!
Everything you want is a dream away, under this pressure, under this weight, we are diamonds taking shape(Adventures of a lifetime) Written by: Archi ChakrabortyBatch: June 2nd, 2019
All the captions used in this article are from the lyrics of songs by Coldplay.